After its second break of the 2017 season AMSOIL Arenacross’ Race to the Ricky Carmichael Cup returned to the track on Saturday night for the penultimate round inside the Denver Coliseum. For the second consecutive round, Rockstar Energy/OTSFF/Yamaha, in association with Cycle Trader and Rock River, rider Chris Blose took the overall victory in the 250AX Class, adding some drama to the title fight. In the Western Regional AX Lites Class, Team Babbitt’s/GPF/Monster Energy Kawasaki/MMCR rider Ryan Breece raced to his third win of the season, which vaulted him into a tie atop the championship standings. Blose was on another level in the first Main Event and quickly opened a comfortable margin over Faith within the first couple laps. He would continue to extend that lead as the race wore on, allowing Faith to assert himself in second. With the top two riders comfortably out front the attention moved on the battle for third as Team TiLUBE/Jack’s Links/TUF Racing Honda’s Ben Lamay patiently worked on Herrlein for the majority of the Main Event. On Lap 11 Lamay pulled the trigger and was able to get by Herrlein to take over third. As this all unfolded Owen was working hard to fight his way through the field, breaking into the top five and mounting a late challenge on Herrlein.

Blose cruised to the win 8.1 seconds ahead of Faith, while Lamay followed in third. Owen successfully passed Herrlein to finish fourth, capping off an impressively resilient effort.

When the field stormed out of the gate for the second Main Event it was Lamay who put his Honda out front early, with Blose right behind. Herrlein started third, followed by Owen and Faith. Looking for his second straight Main Event sweep Blose passed Lamay for the lead on Lap 1, but the Honda rider continued to fight. Owen was able to move into podium position by passing Herrlein on Lap 4, and on the following lap Faith encountered misfortune, dropping from fifth to eighth. The drama picked up again on the ensuing lap when Blose went off track while leading, handing the lead back over to Lamay and falling to fifth.

Blose’s misfortune provided an opportunity for Owen to make a run for the lead on his teammate and soon enough a battle for the lead was brewing. Lamay was able to fend off his teammate for the majority of the Main Event, but Owen found a way around on the final lap to take the win by less than a second. Team Babbitt’s/Monster Energy/AMSOIL Kawasaki’s Travis Sewell finished third. Behind them both Blose and Faith did well to recover from their troubles, with Blose finishing fourth and Faith fifth.

The resiliency that Blose showed in recovery of his off-track excursion, combined with his Head 2 Head Challenge win, was ultimately enough to give him his second straight overall victory (1-4). Lamay finished second overall (3-2), while Owen’s win in the second Main Event landed him third (4-1). Points leader Faith was fourth (2-5), with Sewell fifth (9-3).
Despite missing out on a podium result Faith maintains control of the Race to the Ricky Carmichael Cup standings heading into the final round. He now sits just five points ahead of Blose, while Owen sits eight points out of the lead in third. They will be the only riders eligible to win the Ricky Carmichael Cup, setting the stage for an exciting final night of action in Las Vegas. The Western Regional AX Lites Class Main Event got underway with Woodstock KTM’s Hunter Sayles grabbing the holeshot over Breece and his Team Babbitt’s/GPF/Monster Energy Kawasaki/MMCR teammate Jacob Williamson. However, Sayles got held up briefly entering the whoops and the loss of momentum allowed both Breece and Sayles to get by and dropped Sayles to third. Once in the lead, Breece laid down fast laps with the clear track ahead of him and opened up a multi-second lead over the field.
Williamson did well to keep his teammate honest, but Breece’s consistency allowed him to maintain a comfortable margin. Breece went unchallenged throughout the entirety of the 15-lap Main Event and took the win by 1.9 seconds over Williamson, giving the GPF Kawasaki squad a 1-2 finish. Sayles fended off a heavy challenge from DrivenMX Racing KTM’s Jeramy Taylor to round out the podium in third.
The win paid big dividends for Breece in the Western Regional standings, moving him into a tie with Sayles atop the championship with just one round remaining. DrivenMX Racing KTM’s Jared Lesher, who finished 13th, sits third, 15 points behind the leaders.
The final round of the Race to the Ricky Carmichael Cup will take place on Friday, May 5, from Las Vegas’ Orleans Arena as part of championship weekend alongside Monster Energy Supercross, which will take place on May 6 at Sam Boyd Stadium, and the AMSOIL Amateur National Arenacross Championship from Orleans Arena on May 7. The AMSOIL Arenacross finale gets underway at 8 p.m. PT / 11 p.m. ET.
Words: Press Release        Photos: ShiftOne Photography 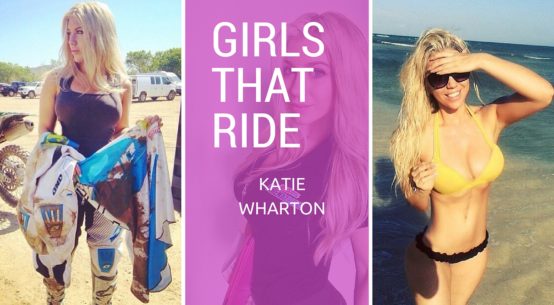 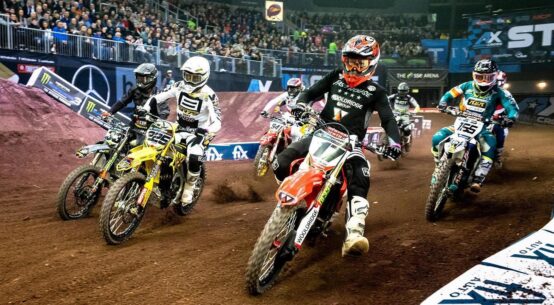 Arenacross UK is back Summer 2021! 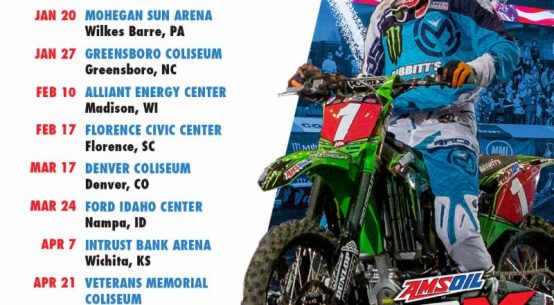