Eli Tomac drew first blood in this year’s 450 Class title fight with last week’s sweep at Hangtown, but a lot can change in one week. At Saturday’s FMF Glen Helen National, Tomac was hobbled by a poor start in Moto 1 and bike issues in Moto 2.

As a result, Marvin Musquin took advantage, earning his first career moto win and first career overall win in the 450 Class. He is also the new series points leader.

He wasn’t the only one setting a new milestone though: Jason Anderson also captured his first career 450MX moto win in Moto 2.

Read on for a breakdown of what went down at Round 2 of the 2017 Lucas Oil Pro Motocross Championship. Moto 1
Musquin took the holeshot in Moto 1, but when things shook out behind him, there was a surprise: Justin Hoeft, a local rider, was in second ahead of Cole Seely. As for Tomac, he was plagued by another bad start and had to work his way through the pack from outside the top ten

After overtaking Hoeft for second, Seely set his sights on Musquin. Not far behind them were Christian Craig and Josh Grant. Grant got around Craig for third, then challenged Seely, but Seely held him off for the time being.

Tomac cracked the top five before the midpoint of the race after passing Dean Wilson but was still about 15 seconds behind 1st-place Musquin and 10 seconds behind 4th-place Craig at the time.

A few minutes later, Grant passed Seely on the outside of a turn to take second place, then Craig got Seely for third not long after. With under ten minutes left, Seely then had to contend with Tomac. As Seely went around a turn, Tomac was able to find a narrow gap on the inside and squeeze himself in there to make the pass.

Tomac soon caught Craig, initiating a battle for third that lasted a few minutes and required them to fight through lapped traffic. With about 5:30 left on the clock, Tomac finally got around him to move into podium position. At the time though, he was still about 12 seconds behind Musquin and 7 seconds behind Grant.

Tomac initially struggled to pick up ground on Musquin but was able to catch Grant because of one really slow lap from Grant. With two laps to go, Tomac was all over the back of his teammate and eventually passed him for second. But there wasn’t enough time to chase down the leader. Musquin took the checkered flag for the first 450MX moto win of his career, and Tomac came in second, about six seconds behind. Grant finished third for the third consecutive moto to start the season. Moto 2
Craig earned a holsehot for the second week in a row to start Moto 2, with Blake Baggett, Justin Barcia and Justin Bogle behind him.

Behind them, things didn’t go smoothly for the Kawasaki riders, as Grant crashed and Tomac had bike issues. Tomac was forced to hit the mechanic’s area to get the bike fixed, and he was a lap down by the time he exited.

Ten minutes into the race, it was Craig, Baggett, Anderson, Barcia and Musquin comprising the top five, all separated by less than six seconds. The top three — none of whom had ever won a moto in the 450 Class — in particular were extremely close.  Within the span of about 30 seconds, both Baggett and Anderson passed Craig, who briefly was in position for the overall win, to take the top two spots. Meanwhile, Musquin got around Barcia for fourth.

Just before the midway point, the race saw another lead change, as Anderson went inside of Baggett to take the top spot away. That wouldn’t end the fight though, as Baggett stayed close behind the Rockstar Husqvarna rider for a bit.

With about 10:30 left on the clock, Craig went down and was visibly in pain on the side of the track immediately after. That enabled Musquin, Broc Tickle and Bogle to move into 3rd, 4th and 5th. Musquin found himself more than 20 seconds back of Anderson though and would have to settle for third place.

Up front, Anderson was able to put some distance between himself and Baggett. Anderson took the checkered flag to score his first career moto win. Baggett finished five seconds behind him. 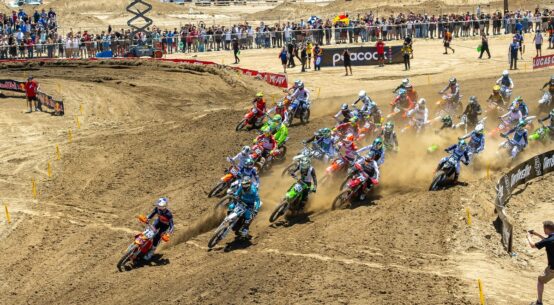 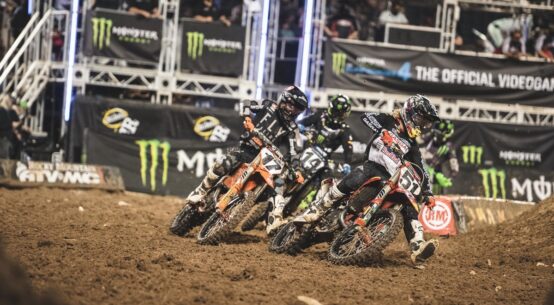 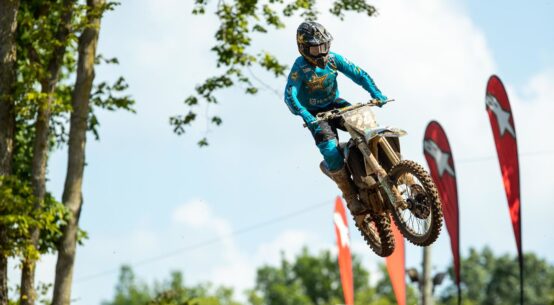 How to watch the 2021 Fox Raceway II National 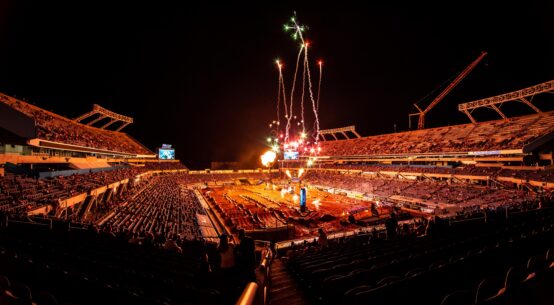