The 13th round of the 2017 FIM Motocross World Championship hosted in Loket, Czech Republic concluded today. The MXGP of Czech Republic was a challenging one for all the riders but it was the Red Bull KTM Factory Racing riders of Antonio Cairoli and Pauls Jonass who each took their 6th overall win this season and kept the championship lead. MXGP race 1 roared down Loket start straight to the Fox Holeshot line and it was Monster Energy Kawasaki Racing Team’s Clement Desalle who was there first. Desalle was followed by HRC’s Tim Gajser who quickly took the pole position away from the Belgian.

Meanwhile Red Bull KTM Factory Racing’s Jeffrey Herlings was quickly progressing forward from a 9th place start. On the final lap Cairoli caught Desalle and Herlings caught Tonus. While Herlings made it by Tonus, Cairoli couldn’t get past Desalle. Gajser took the race win, his first since the second race of Trentino. Gajser in the press conference said, “I’m really happy because the weekend was really positive after many weeks struggling and to be back now on the podium is great.”

After being narrowly beat out on the start of race 1 Tim Gajser responded with the FOX Holeshot in race 2. He then led the first 5 laps before Cairoli cut to the inside and took the spot away. Only one lap later Desalle also found his way past the reigning champ.

With Cairoli leading and Desalle second, Herlings surprised Gajser taking the 3rd position with a quick inside pass. Gajser finished race 2 in 4th to take the 3rd overall.

Cairoli took the race win, his 83rd career overall, and later in the press conference said, “I’m really happy to leave this GP with a victory. I want to dedicate this victory to the rider who passed away yesterday, we are all together with his family and hope that they will be ok.”

Desalle consistent 2-2 took second overall to which he said, “It’s a strong a day, it a good result and I’m happy that it was positive today. I had a strong ride, I was focused on myself and I enjoy what I did” Red Bull KTM Factory Racing’s Pauls Jonass came back to Loket track with a vengeance. Jonass who had a season ended crash here last year started the day in the top 5 off the start of race 1.

Covington, who struggled to pass Prado during Saturday’s qualifying race, made quick work of the #61 jumping into the lead on 2nd lap. Covington grew his lead to a considerable margin over the field and cruised to the race win.

Meanwhile Jonass first passed Bogers, who dropped to 7th by the finish, and then passed his teammate Prado. The two KTM’s stayed 2nd and 3rd to the checkered flag.

In race 2 another Rockstar Energy Husqvarna took the FOX Holeshot but this time it was that of Conrad Mewse. Mewse however would drop to 12th by the finish while his teammate Covington had a bad start and finished 10th. Covington in the press conference said: “I felt really good yesterday in the qualifying race and then again in the first moto this morning. I didn’t think I was going to get on the podium and got lucky after getting back to 10th in race 2.”

Prado led the first lap but was again passed by his teammate Jonass who opened a gap. While Prado was second Jeremy Seewer was right on his back wheel. Seewer tried to pass Prado numerous times but was shut out by the young Spaniard.

Seewer eventually came under pressure from Kemea Yamaha Official MX Team’s Benoit Paturel. The pressure created even more urgency for Seewer who eventually clipped the back of Prado and went down. The crash swallowed up Paturel as well and the two HSF Motorsport’s rider of Calvin Vlaanderen and Brian Bogers inherited the positions.

Both Seewer and Paturel rebounded first passing the HSF bikes back and then Prado as well. Seewer in the press conference said: “It was frustrating to not be able to pass Jorge, he is such a smart rider so it is very difficult to pass him. I’m looking forward to Lommel…I feel good there, I do a lot of testing there”.

LRT KTM’s Julien Lieber had an up and down weekend with 18th in race 1 and a 5th in race 2.

Pauls Jonass was the one who claimed the overall with an unbeatable 2-1 result. Jonass in the press conference said: “I felt really good all weekend, starting with qualifying yesterday I really enjoyed it. In the end I just controlled the race and got the win.” 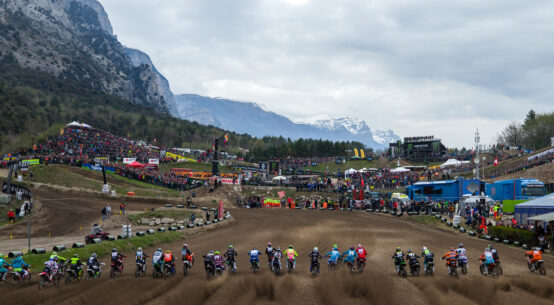 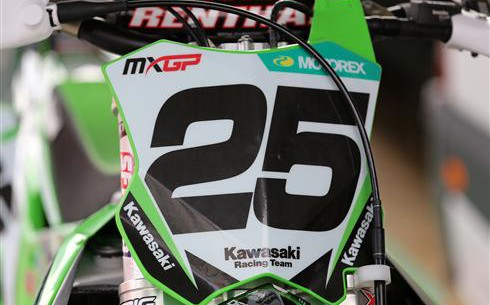 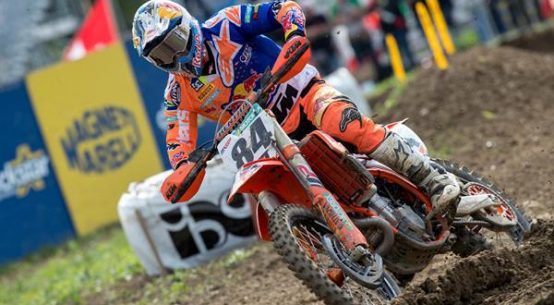 Second MXGP win in a row for Herlings 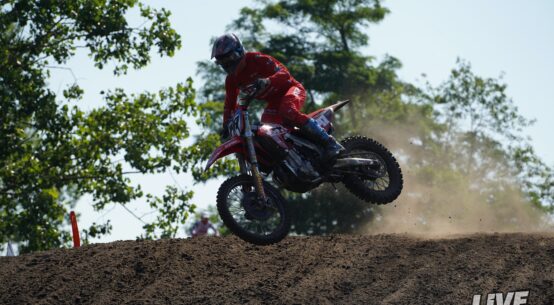 How to watch the MXGP of Loket