Last Sunday the St Blazey Mx Premier Motocross Championship reached the halfway mark in the series as it made its way up in to Wiltshire to Grittenham for round 4. A lot of hard work had gone in to preparing the track and with a shower or two overnight it was nigh on perfect for the first two blocks of racing, but things were to get a bit damp for the last block, but never the less there was some top racing to be seen. As with the previous round expert entries were a bit low so the top 9 qualifiers from both Junior qualifying races were put in with the experts.

In the St Blazey Mx Expert Championship class it was Championship leader Dan Thornhill on the Cab Screens Husqvarna with a blistering start from the Dave Thorpe Off road centre Honda of Josh Gilbert (Pictured No 3) who was quickest in qualifying with the Tony Maunders Racing Suzuki of Jamie Skuse tucked in 3rd. Thornhill was trying his all to shake off the young Cornishman for the first couple of laps, but Gilbert was to stay within striking distance then on lap 4 Gilbert closed right up on Thornhill and really piled the pressure on and eventually was to ease his way pass to take the lead and was soon pulling away at the front. Skuse was still there in 3rd, but there was a real battle royal going on behind him between wildcards Paul Neal and Shane Carless on the Marsh Mx Honda which went on for several laps with Carless eventually getting pass 2 laps from the end, but there was only one winner and that was Gilbert who took a comfortable win from Thornhill with Skuse a safe 3rd. In the second moto, this time it was Skuse with the best start from team mate Jordan Carter, but as they entered the third corner Carter went down and there was a bit of a pile up. Thornhill was to get through in 2nd and was all over Skuse on the opening lap and took the lead, Gilbert was to move up in to 3rd by the end of the opening lap after getting caught up in the Carter incident and was soon all over Skuse pressing for 2nd which he took on lap 2 and was soon chasing down Thornhill at the front who he caught on lap 5, but it took Gilbert another couple of laps to find away pass when Thornhill made a slight mistake. Gilbert started to pull away at the front, but with 2 laps remaining Thornhill put in a late charge and closed right up again but it was to no avail as Gilbert took the win from Thornhill a close 2nd and Skuse coming home in 3rd. In the last race which was a bit on the damp side it was Carless with the best start from Thornhill and Gilbert with Carless who seemed to like the slippery conditions easing away on the opening lap. Luke Sturgeon on the D S C Cornwall Kawasaki was another rider who seemed to relish in the conditions as he was all over Gilbert and Thornhill on lap 3 and was to get pass both and was then to take the lead after Carless made a mistake at the front. Sturgeon was looking good at the front, but staying with him all the time was Thornhill and Gilbert who were both to pass Sturgeon a lap later. Skuse was to get the better of Sturgeon mid race and moved in to 3rd, but not for long as Skuse slid off on a fast lefthander and back up in to 3rd after his earlier mistake was Carless, but he wasn’t going to catch the leading two as Thornhill went on to denie Gilbert a clean sweep of wins, but it was Gilbert who took the overall. In the expert junior class which ran with the experts it was Jordan Barrs who came out overall winner on the day with three consistant rides taking a win and two seconds with Junior Championship leader Jake Curtis-Stevens on the D S C Cornwall Kawasaki winning the first and last race, but a clutch problem in the second moto put him way down.

In the R C Motorhomes MX1 2-Stroke Championship there were many wildcard entries with one of them being Adam Harris on the Gibson Tyres Yamaha who had notched up the fastest time in qualifying and totally blitzed the opening race and was set to do the same in the second moto when leading with just 5 minutes remaining he took a nasty tumble going end over end. Championship leader Leighton Holmes on the J D Racing Ktm (Pictured No 564) was to win the second moto from Harris who remounted to finish 2nd, but Harris was a bit battered and bruised and didn’t come out for the last race which was dominated by Holmes who with it extended his MX1 2-Stroke Championship lead to 18 points over Ben Milward at the halfway point.

The M D Racing Over age classes there was no stopping Over 35 Championship leader Wayne Shimell on the TyreMarks/St Blazey Mx Honda with yet another hat trick of wins over the Cheddar Mx Ktm of Darren Banwell who took 2nd in each race. In the Over 40’s it was a clean sweep for local Swindon rider and Championship leader Stuart Rawlings (Pictured No 57) with Richard Green and Stephen Elford doing likewise in the Over 45’s and 50’s.

In the Junior B class, it was Edward Turner (Pictured No 90) who took the overall with two wins and a 2nd, with Harry Day denying Turner a clean sweep in the second race after Turner had a bad start. Report and Photos by Dave Rich 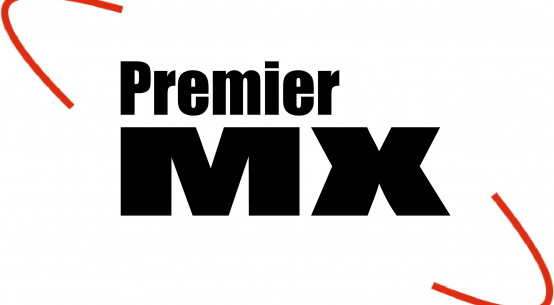 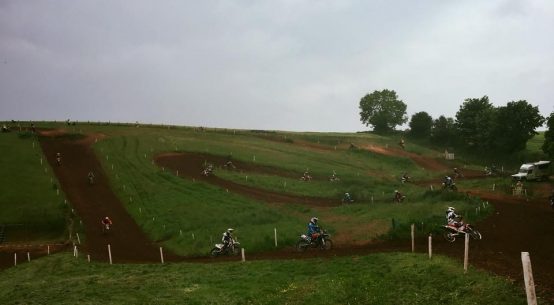 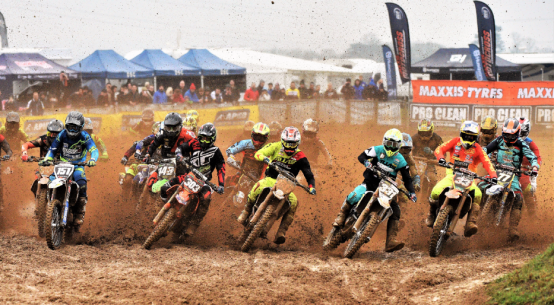 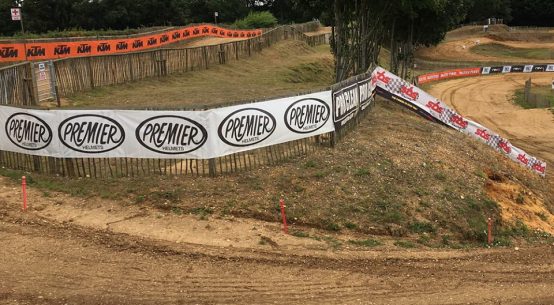